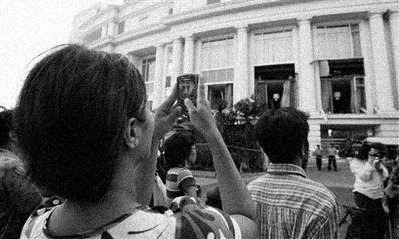 I don't usually write or design anything related to politic issues but this time I can't hold my emotion toward those cowards responsible for the recent Jakarta Bombing. It's unfair when our country is labelled as a dangerous country while we are actually the victim of some psycho terrorist it self. By a matter of minutes, 9 good peoples are lost, hundreds wounded, 200 millions honest and hard working Indonesians are effected by the action of 2 suicide bombers.

When will those psycho learn how to design something good rather than going suicidal and making bombs. Earn big money, get exposed and entertain people by making FIREWORKS if they are so into exploding something...

But, let me assure you all that the show is running as scheduled. Those kabloey monkeys is not going to stop any of my design! YEAH!

I'm about to release 3 new paper toys. One of them will is a speakerdog custom from bentheillustrator, it will be distributed by the end of this month. Make sure you stay tune to that as they will release 250 customs from all over the world!

Another toy that I'm going to post is a set of character from my good friend's comic Fantasy Story Comic who will be participating at the Singapore Toy, Games & Comic show.

The last toy is of course our baby Lynx who is still under development process.


Show your support against terror on humanity,
download the Indonesia Unite Shield.
Posted by Saltnpaper at 18:14

good for you voicing a sane, strong opinion about something you believe to be wrong. bravo. see? lots of people got to see this and you didn't have to blow up anything to make your point. i agree 100%. fewer bombs, more conversations.

YES. This is exactly what the movement needs. People using their talents/skills/abilities to voice unity and courage. (off to download the shield)

Saltnpaper
Humorist on the outside, humanist on the inside. A designer who believes in progression, hope & Lego toys.